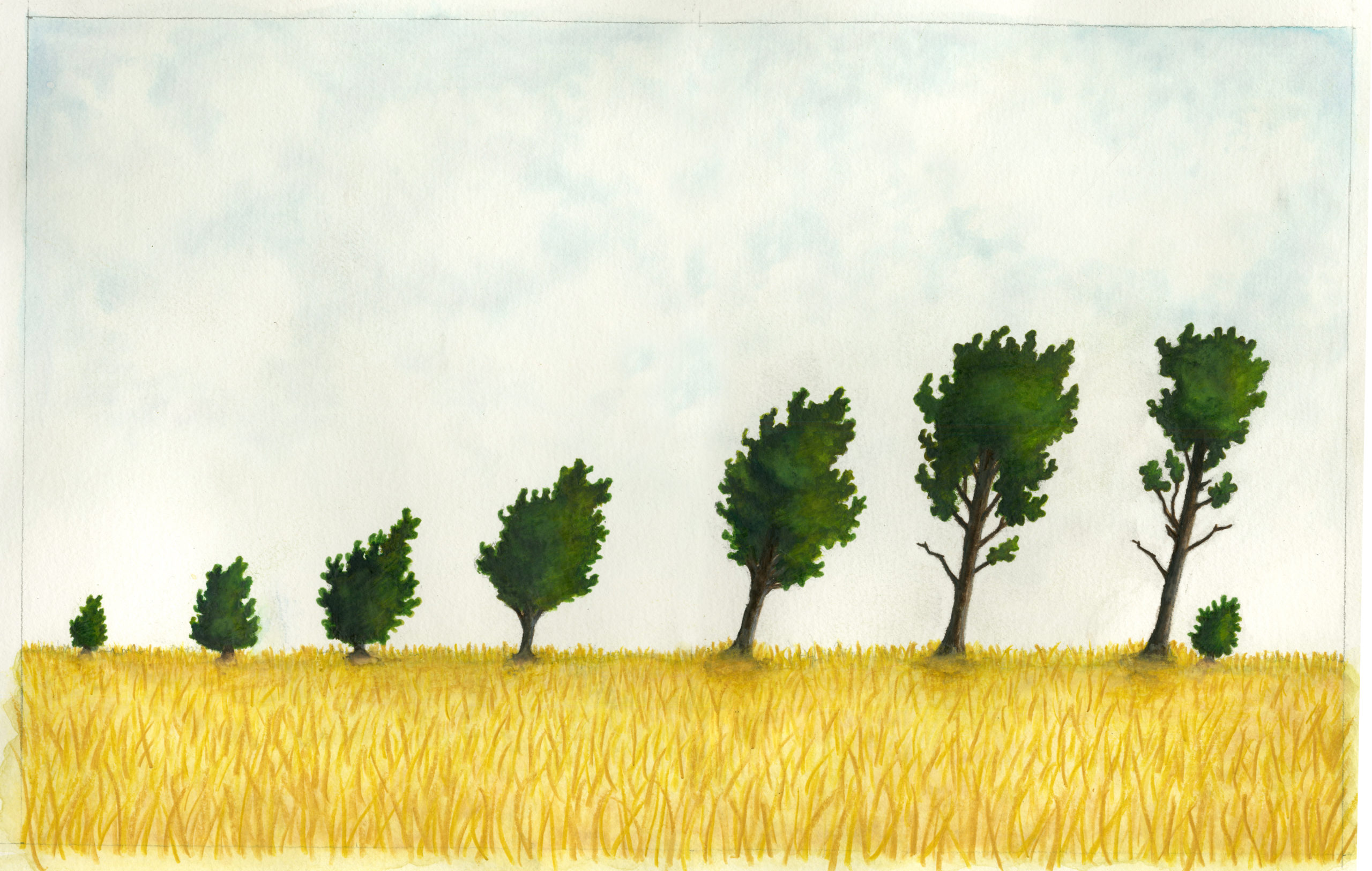 [original drawing by the author]

While truly an indigenous tree only in the pocket remnants of ancient groves found at Point Lobos and Pebble Beach along the Monterey peninsula, Hesperocyparis macrocarpa is today a culturally significant tree that has come to be naturalized in many other locations around the world, including north and south along the California coastline.  This multigenerational legacy, of which Cypress Lawn Arboretum is a part, has been described and showcased with my own tree photography in prior volumes of this blog series (notably Volume II – Natural[ized]).

One place in particular, a culturally unique landscape that shares a kinship with Cypress Lawn primarily through the historic planting of Monterey cypress trees, has a story that I would like to share with you in greater detail.

This place is known as The Sea Ranch. 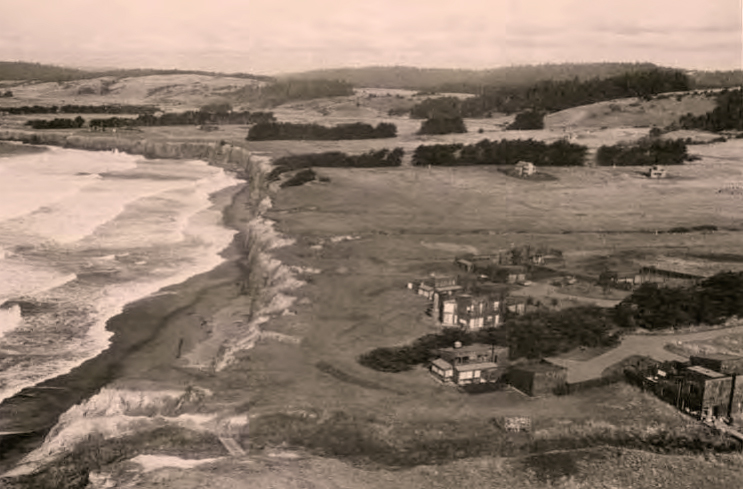 This architecturally iconic residential community, established in 1961, occupies approximately 4,500 acres of land along 10 miles of rugged northern California coastline, just south of the Gualala River mouth at the boundary of counties Sonoma and Mendocino. Renowned landscape architect Lawrence Halprin was chosen by developers to be the guiding environmental designer of this project, leading a diverse team of consulting architects, geologists, and other meaningful collaborators. The collective efforts of Halprin’s formative team sparked the evolution of a residential community pioneering in its intent to act as steward to the landscape it lives within. Halprin referred to this ethos as “living lightly on the land,” an intention that is grounded in a respect for nature and the elements of the landscape that preexisted the community itself – including, of course, the trees.

Forty years before Halprin ever visited this landscape and began to grow his ideas for The Sea Ranch as a place for people to inhabit, another visionary individual set in motion the landscape process that would inspire the generations to follow, including Halprin himself. In 1916, a San Francisco businessman by the name of Walter Frick came into possession of the tract of land that is today The Sea Ranch. At the time, this coastal meadow terrace was completely devoid of large trees and had existed as a grassland for many centuries dating back to the days of inhabitation by the indigenous Pomo people. As the first humans to occupy this land, the Pomo practice of annual grassland burning to facilitate the harvest of bulb plants dramatically reduced the coverage of the native coyote brush, or any other shrub or tree coverage. The image below, an 1880 sketch by Charles W. Nystrom, shows the consequent landscape inherited by the first white settlers of the region, essentially an endless meadow of native perennial grasses. 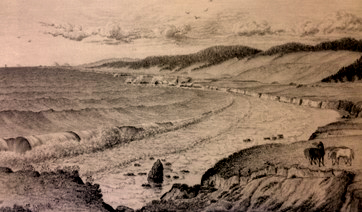 It was this endless meadow that Frick, pictured below in 1921, chose to utilize as grazing grounds for his herds of sheep. To manage the landscape in the context of the prevailing northwesterly winds coming in from the Pacific and to efficiently tend to his 3,000 head of livestock, Frick planted the now-iconic Monterey cypress hedgerows, which served as windbreaks and divided the land into 24 “ranchettes” of about 200 to 250 acres each. This singular management decision by Frick to plant trees and “improve upon the landscape” would change the place forever, in ways far surpassing his original agricultural intention. The Del Mar Ranch was thus born and delineating rows of young Hesperocyparis macrocarpa trees began to grow, initiating a transformation of the coastal terrace that is deeply rooted to this very day. 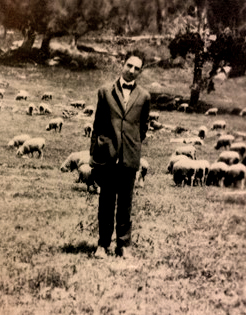 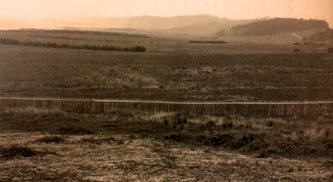 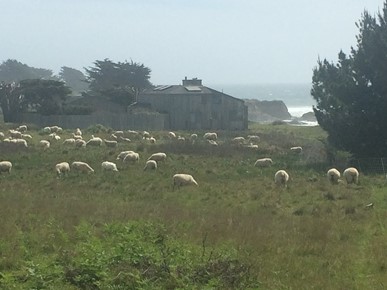 Four decades in the lee of Mr. Frick’s cypress plantings, it is no wonder that Halprin would find such great inspiration in the maturing windrows of Monterey cypress that he witnessed in his initial explorations of this iconic stretch of California coastline at the beginning of the 1960s. In his own words, from “The Sea Ranch: Diary of an Idea,” Halprin speaks of the formative cypresses:

“Our various studies made us particularly aware of the overwhelming force of the prevailing winds from the northwest. This was especially strong when we stood out in the meadows where there were no trees to impede the force. We understood that we were confronting an austere, windswept, and often foggy landscape of great power and presence with a character that would demand very special and unique solutions to make it viable for human occupation … On the windswept coastal meadows early ranchers [Frick!] had planted dense rows of Monterey cypress as windbreaks. We derived lessons from analyzing the wind erosion of these existing trees and how they were shaped into specific and constant slopes and pitches. In this natural way, wind was controlled in the lee of the hedgerows. We realized that these same slopes could establish for us the appropriate roof slopes for new buildings and that these roof slopes could provide protection from the severe wind.”

In this way, the individual form of the windswept cypress trees came to be manifested in the architectural logic of The Sea Ranch’s dwellings, which are today regarded as design triumphs. In addition, the “clustered” nature of the early neighborhoods and condominiums at Sea Ranch reference the form of the densely planted hedgerows, nestled in the wind-protected lee of these awe-inspiring cypress groves. Truly, were it not for Mr. Frick and his sheep, The Sea Ranch would never have arisen as the cultural icon and heritage landscape that it is today. Simply put, the Monterey cypress is fundamental to the origin and ongoing legacy of this entire residential community. 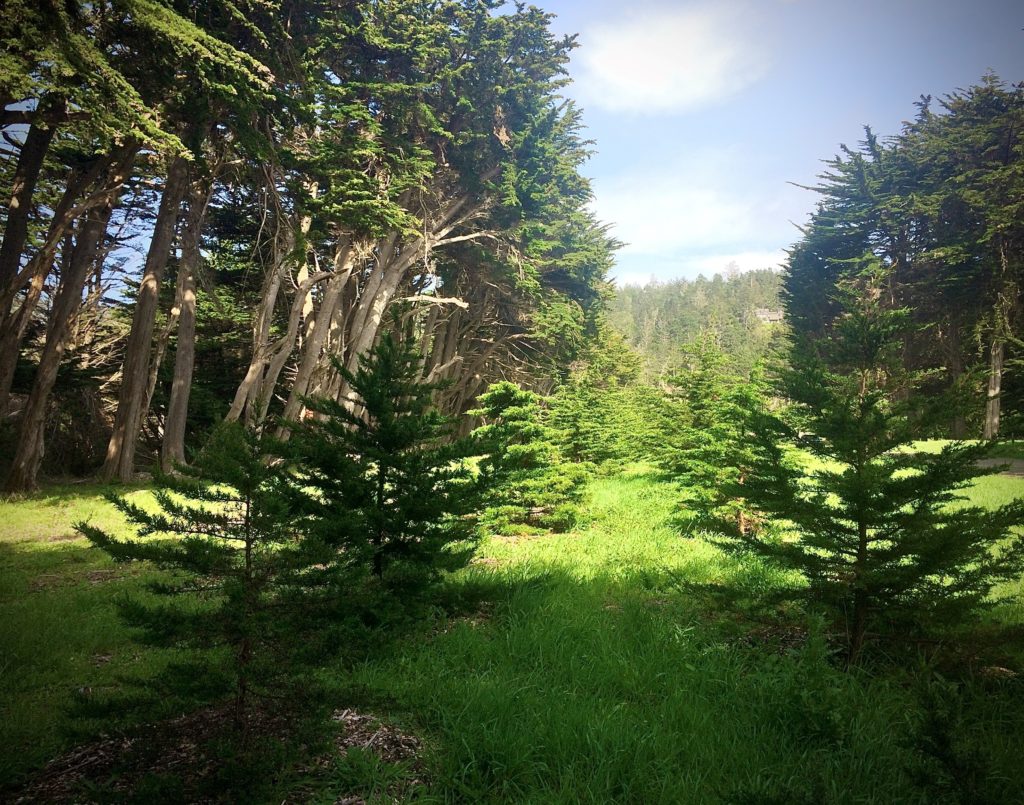 [personal photography of the author, 2017]

One signature element of the landscape today unites The Sea Ranch and Cypress Lawn together.  130 years ago (or one generation in the life of a Monterey cypress forest), both places were primarily vegetated by native grasses, from the coastal terrace meadows of northern Sonoma County to the gently sloping alluvial plains west of the San Bruno Mountains. Then, through a multifaceted cultural process, of people engaging with the land and planting trees, a fundamental change began to emerge that lives on to our own time. Past any one person’s lifespan, beyond even the visionary intentions of Walter Frick and Hamden Noble, the cypresses themselves — just by being — have come to indelibly transform the human experience of visiting these two remarkable and iconic places.

At The Sea Ranch and so too at Cypress Lawn Arboretum, our elder cypress trees are in the latter decades of their time gracing us with shade and a reprieve from the gusting northwesterlies.  Trees, like all living things, will one day pass away, and that time is nearing for some of the ancient wonders that inspire me every day while walking the Arboretum grounds.  To share the living legacies of Frick, Halprin, and Noble alike with our own grandchildren, we must replace them!  As stewards of our age, rooting anew the heritage established by these two formative Monterey cypress plantings of the early 1900s is a charge worthy of our embrace.  Indeed, at The Sea Ranch a landscape management program to establish the next generation of cypress hedgerows is well underway (see personal photo of young seedlings in the lee of a mature Hesperocyparis macrocarpa hedgerow, above).  Now, too, here at the Arboretum, a heritage project of planned replacement for select post-mature specimen trees throughout the living collection, including our namesake cypresses, will be a primary endeavor of ongoing management and tree care.

Trees are a treasure oft ignored — even the centurial giants amongst us are walked past, completely unbeknownst to the traveler, a hundred-fold more often than they are truly seen or appreciated for the defining beings they always are.

I wrote the following poem some years before I even knew that Cypress Lawn Memorial Park is a place that exists.  It tells the story of a sacred landscape, becoming across the decades a beloved home for so many people because of a single, simple, emergent natural process: the growing trees. 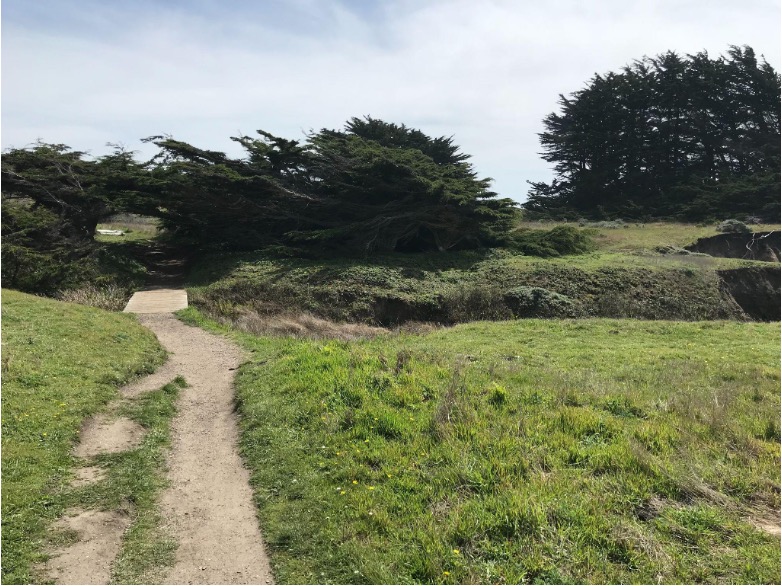 [personal photography of the author, 2017]

A Walk Down Brigantine Reach

I walk beneath your boughs

In your shadow, in the lee

Of the sharp Pacific wind

I find shelter under thee.

In a line, your limbs defiant

On this triumphant coastal terrace

Pounding surf does ever carve

The hungry waves! A sheltered cave

Become thy branches, the love you gave.

For the earth beneath us!

Thy roots defiant! to the thund’rous pound.

And here I stand, on fallen foliage

As the ocean rumbles on

In a magic wooded haven

Welcome respite of the dawn.

I step lightly, breathing in

The faint aroma of thy kin

Your twisting branches tell a story

From the past! Now, let’s begin…

A hundred years, and more, ago

By cattle, ambling to and fro

The ragged bluff – frigid sea below.

The hills beyond were clear-cut!

By loggers, gaunt and grim

They tore the earth asunder!

The forests gone, the fields depleted

By cows that mooed, and sheep that bleated

A land far from this sacred place

Our most noble, kindred friends

These hedgerows so define this place

Where each meadow starts and ends.

Who bought the acreage to turn a trick-

To sell for profit, to a foreign lot!

They defaulted on payments soon after they bought.

And so, Frick began,

Cash in pocket, deed in hand

To ‘improve upon’ his landscape

And reclaim this ravaged land.

Used to manage his sheep herds

As living barriers, a growing fence.

Were the Del Mar Ranch

And the stern Pacific wind

Cast a bend to every branch.

And his sheep, they baah’d and bleated

In the shelter of the lee.

A line, of cypress after cypress

Giants rising up above me

Their vital shelter have I known.

Before The Sea Ranch

Was ever a thought

This majesty, he wrought!

And so, a century has passed –

The land’s becometh something new

For ‘living lightly on the land’

When he first saw this coastal wonder

In Frick’s footsteps did he tread

For the landscape’s process wandered on

Ever after Frick was dead.

The land is process!

We live in the lee

Of what our forefathers do.

To replace their dying brethren

Lucky to see a hundred years

We must replace them!

We stewards of our age

In Halprin’s lee, to plant a tree

And pen history’s next page.

A final call, a challenge – listen!

As I walk down Brigantine Reach

The wind, it whispers, lessons to teach.

As the branches of old Hespero

Play their song of the northwesterly

Telling the tale, of the winds that prevail

As we walk, safe here in the lee.

Mr. Frick and his sheep

For the legacy of Sea Ranch

Of his memory, must we keep. 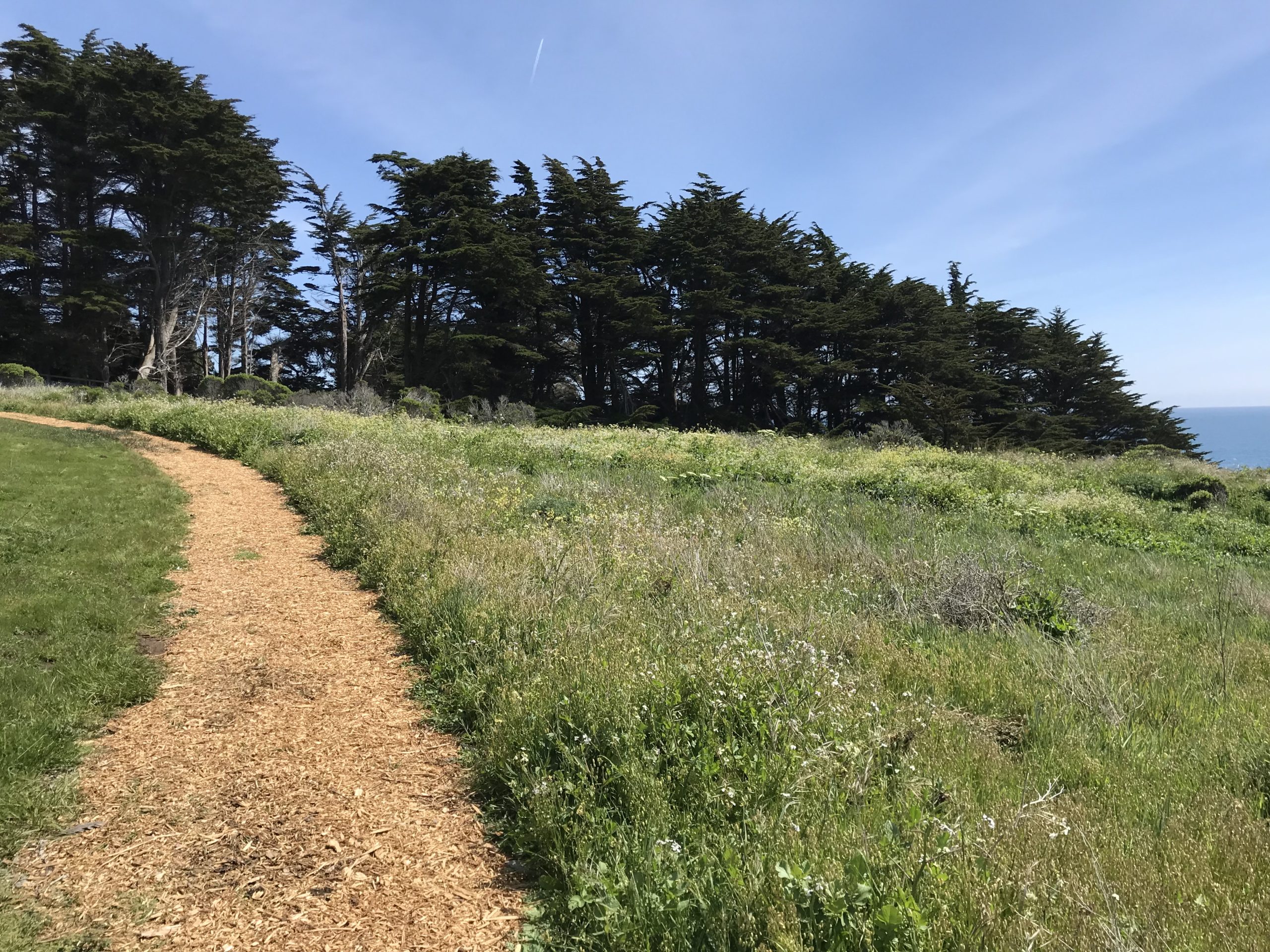 [personal photography of the author, 2018]