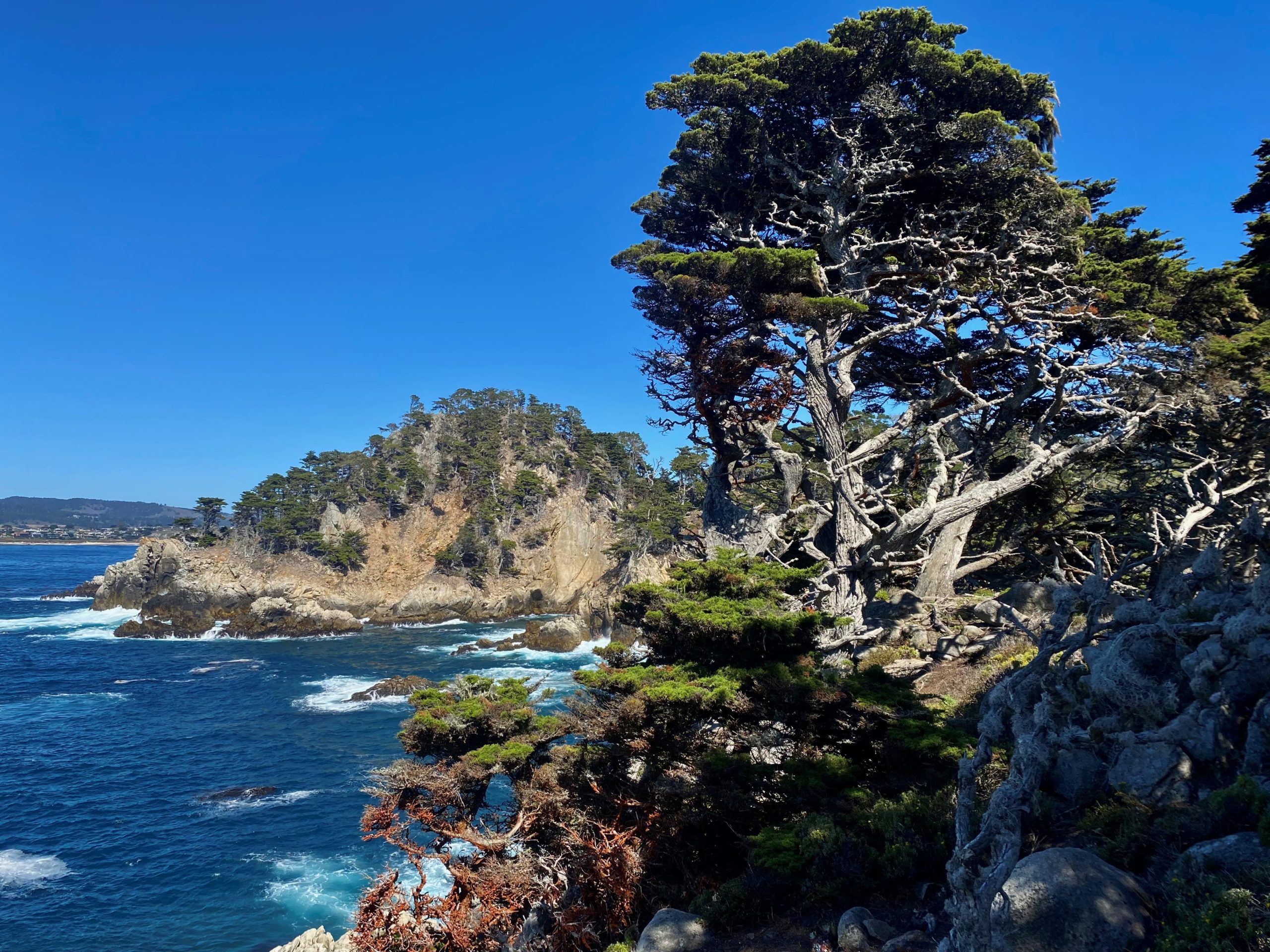 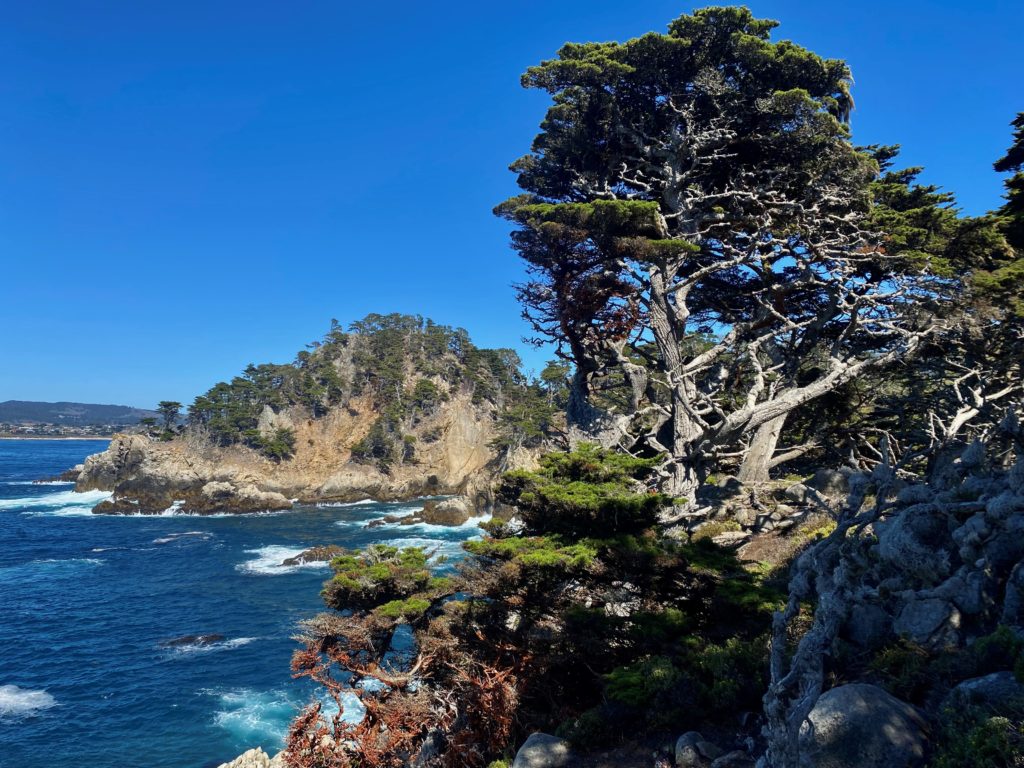 Your rounded canopy swept by fog

Below, in the canyon, your gnarled roots

And above, your thickened buttress stands

Yet, even now, your buttress splits,

And adjacent slopes are strewn with limbs.

Are you aware, old veteran, or your destiny?

But then… do any of us know?

The above poem describes an iconic and ancient Monterey cypress, known as “The Old Veteran of Point Lobos[1].” This tree may still be found today, clinging by limb and root to an eroding promontory on the Pacific’s edge just south of Carmel Bay, quite literally “dancing on the brink of the world.”

This latter phrase comes from a bygone Ohlone song, a single fragment of native culture which has otherwise been lost to history[2].  The California State Natural Reserve of Point Lobos is home to the most ancient stand of cypress trees in the state, with the native range of Hesperocyparis macrocarpa today dwindling to only this and a few scattered groves along the Monterey peninsula[3].  This old stand was a place of spiritual sustenance and ceremony for the Ohlone, where one can imagine them “dancing on the brink” in the shelter of the venerable cypresses[4].

In many respects, the living legacy and heritage of the Monterey cypress is rooted at Point Lobos, the last remaining fragment of a wonder, much like the Ohlone way of life, that stands on the brink of erasure from this world.  The cypress, however, has a story that does not end at this continent’s edge, one that has journeyed, by sea and by seed, to landscapes afar.

In the words of Clinton Scollard, the American poet who visited Point Lobos in 1925, “Who has not trod on Lobos has not known / The face of Wonder intimately shown[5].”  It is in this spirit of wonderment, of deep respect for the true majesty of these trees, that I sought (and continue to seek!) to follow the Monterey cypress on a (horti)cultural voyage around the world.

In this volume of our story, we find Old Hespero in the Australian state of Victoria, in the rural southeastern countryside of this Commonwealth island continent. Here, the evergreen cypress has been adopted to a truly veteran cultural setting, with trees as living memorials of fallen soldiers.

As far back as the Boer War, and more extensively in the aftermaths of World Wars I and II, a national movement in Australia was taken up by the people to plant one tree for every individual who has died at war in the country’s history[7]. This number today stands at 102,000 lives[8], and thousands of the commemorative trees planted are none other than Hesperocyparis macrocarpa. Long, winding allées of Monterey cypress are feature elements in several Australian communities, particularly in Victoria, where the trees have grown in the stead of fallen Australian youth, who otherwise have no grave on their home country’s soil.

The following photographs, poems, and travel log excerpts trace my own exploration of the veteran cypress Avenues of Honour. In the year of my sojourn, 2019, many of these Hesperian specimens were celebrating the centennial of their planting, following the Great War.  In each of the townships of Hexham, Mortlake, Modewarre, Ellerslie, and others, the young men who never came home are remembered still, each day as the branches of Old Hespero reach out to the sky, and strive onward in the light of the sun. 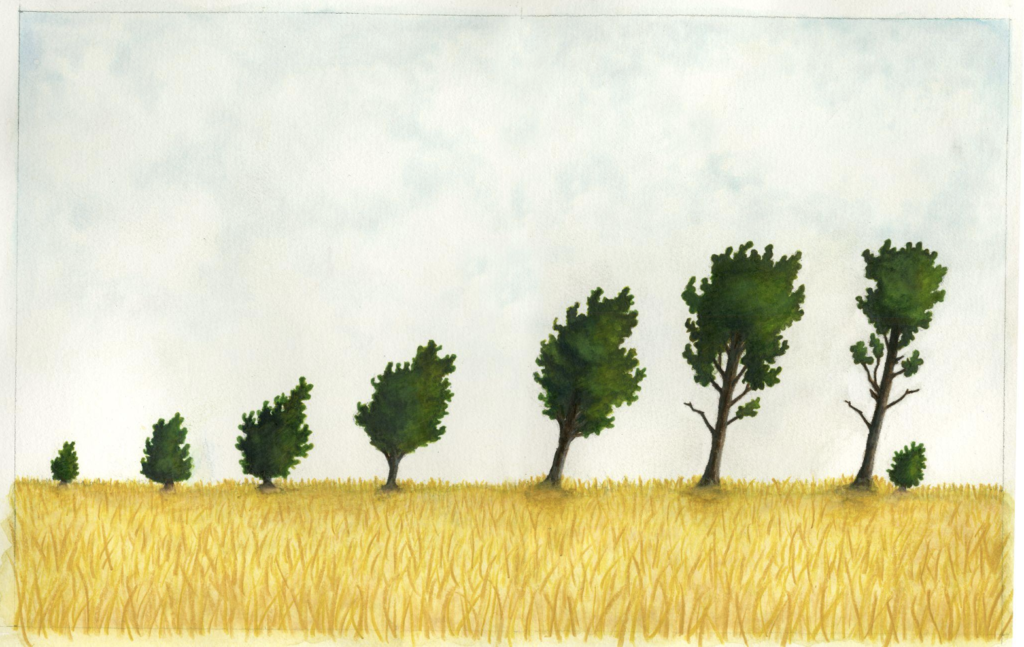 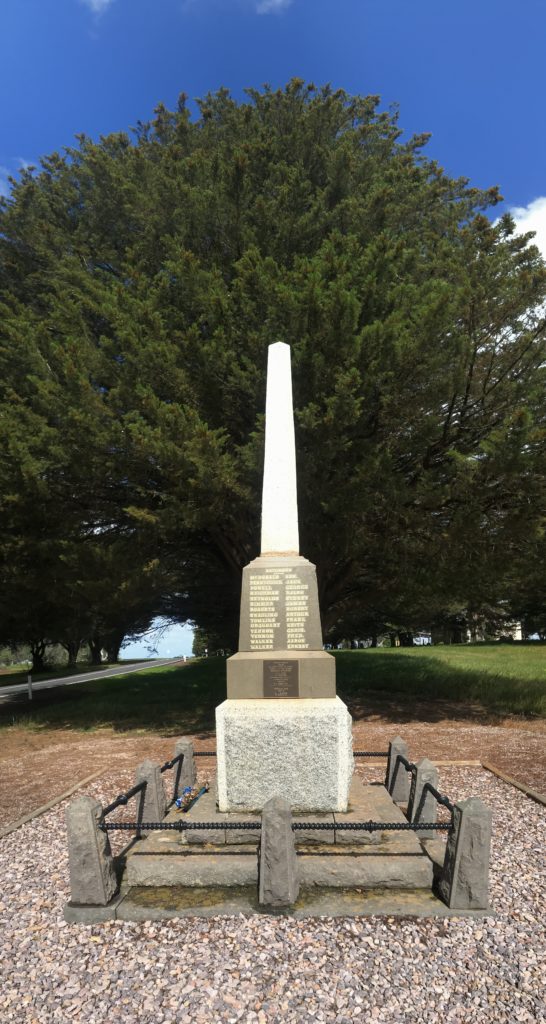 Of the stars that shine above us

Falling from the heavens

As the soldiers of the past

Shall I listen, kindred stranger

Remember, on the wind

Ride the lessons of the last.

I feel as though, in vain, I have attempted today to capture the spirit of the moments I have lived through. To squeeze the soul out of the soil, and onto the page, is a task as behemoth as the cypress trees themselves. I am little, meager, to the majesty of the vision I’ve beheld.

How could I ever capture thee, Old Hespero? I am but a humble seed, hoping upon hope to germ and grow. Yet you, yourself, are the mighty teacher of perseverance.  So as you dig deep into the earth, might I too strive anew. All I can do, I suppose, is try. 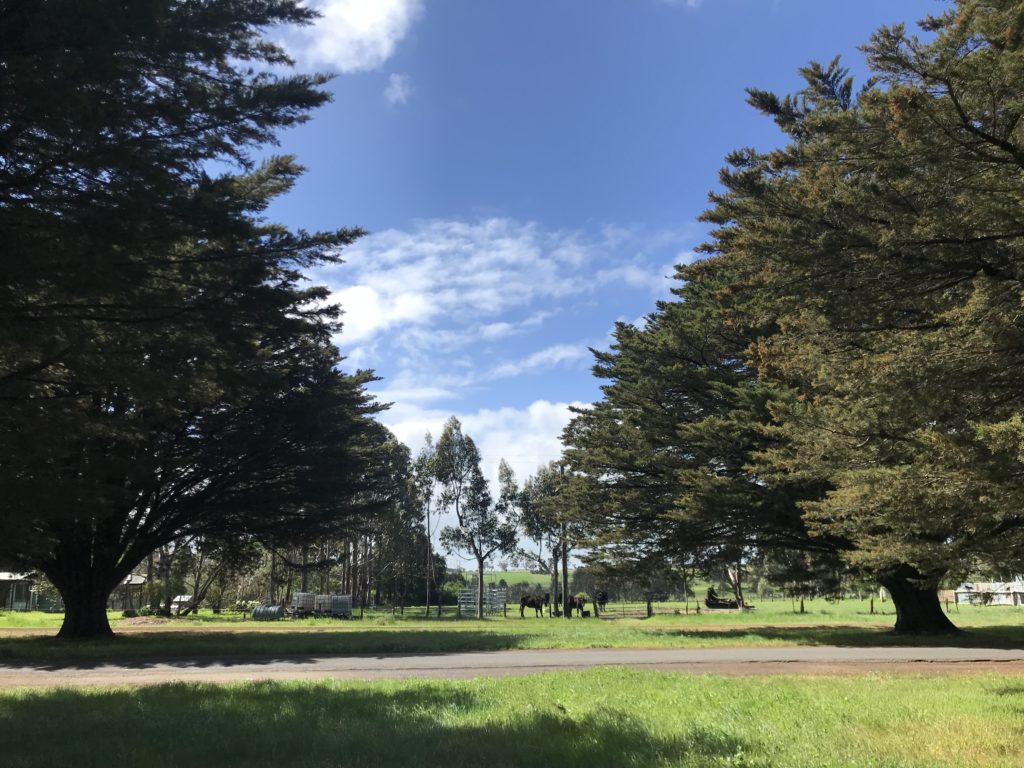 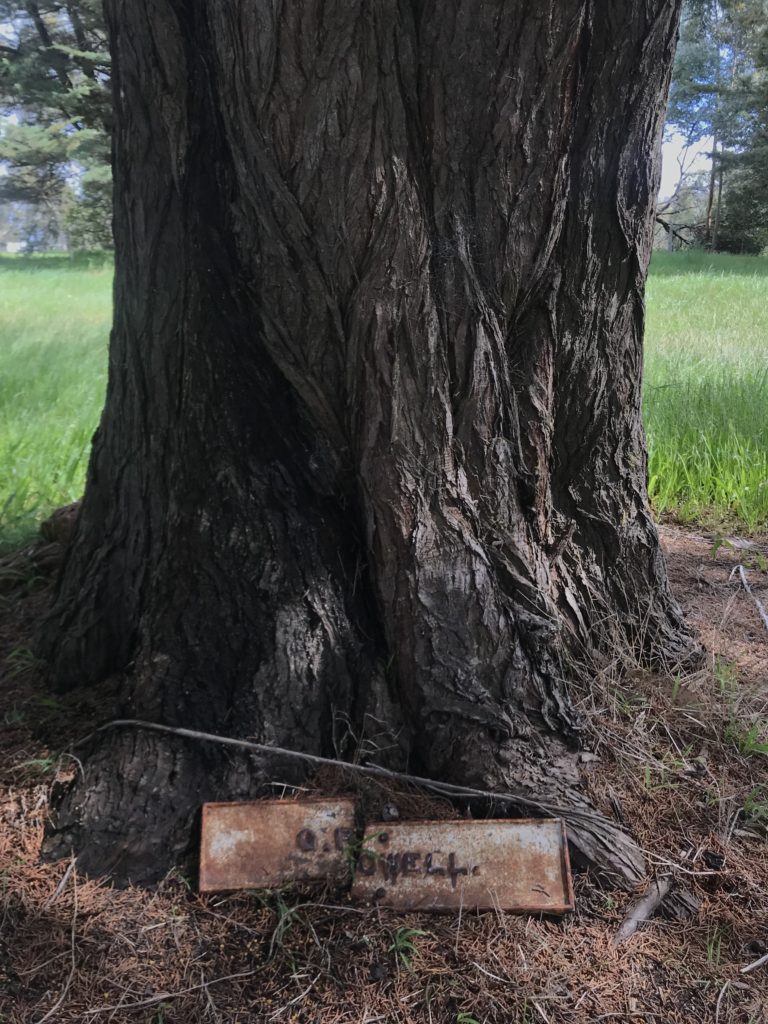 The Avenues of Honour, here in Hexham, are a valiant testament to the courage of the human spirit that, at times in the course of our history, has been needed to salvage the ongoing pursuit of freedom, growth, and love in this world. Those that gave the ultimate sacrifice are the reason for roots that grow deep here, a humble yet living reminder of this empyreal gift.

In truth, the young Australian men who gave their lives to this purpose did so for me, for I am the fortunate youth that has gotten to live the life of freedom that their sacrifice bore. It is in their Honour that I now write, rekindling the flame for those that might follow me. I promise you, men, I will do my best to share your story, of the roots that drink of the earth and the branches that rise now in your name. Yours is a story worth telling. 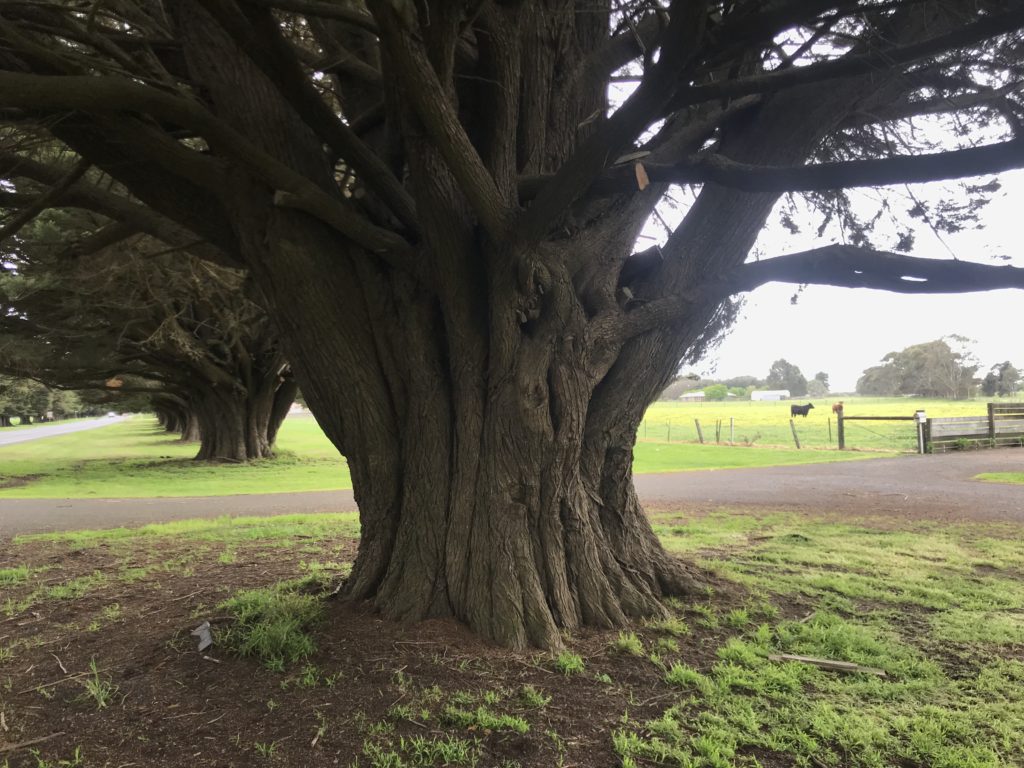 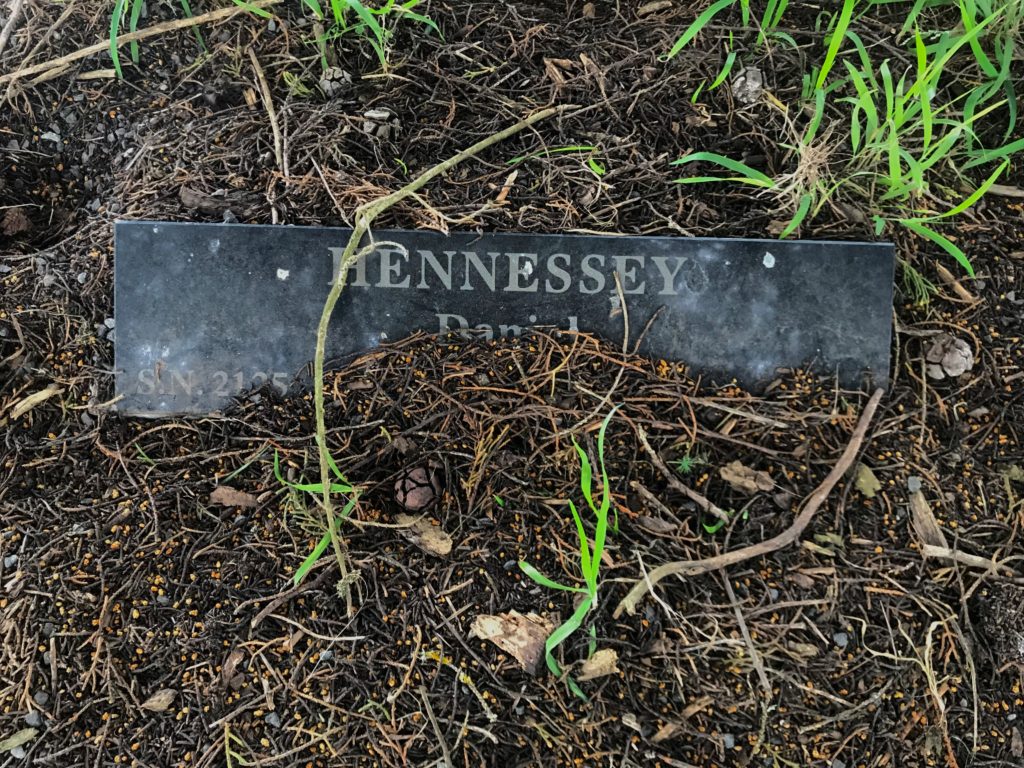 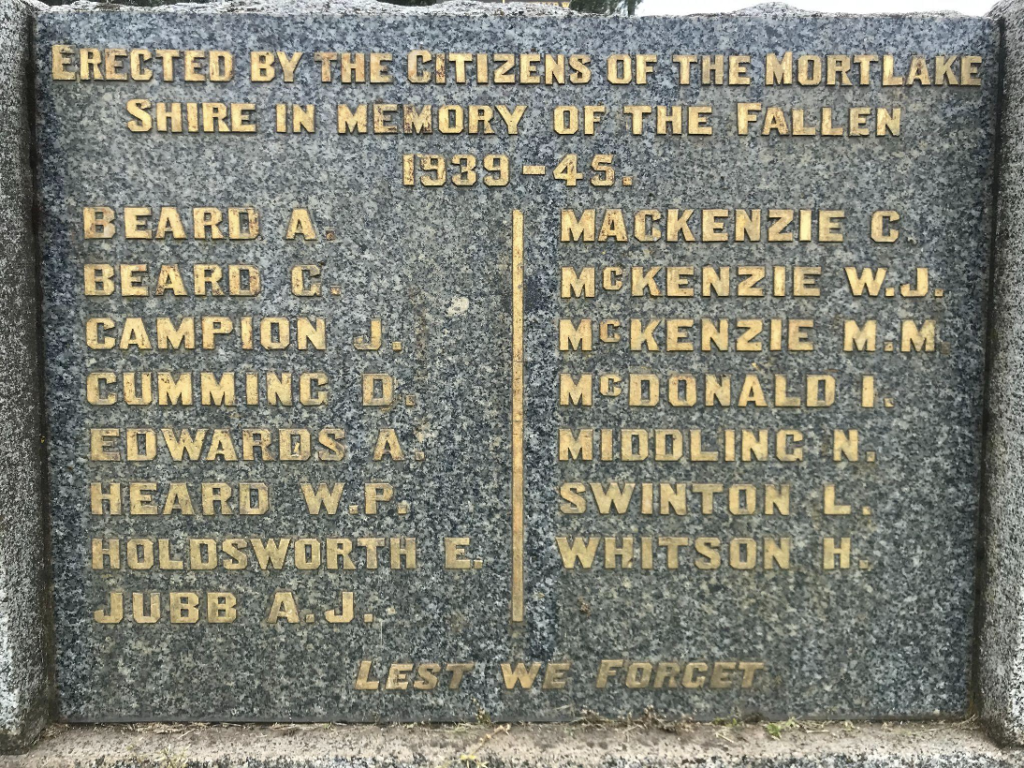 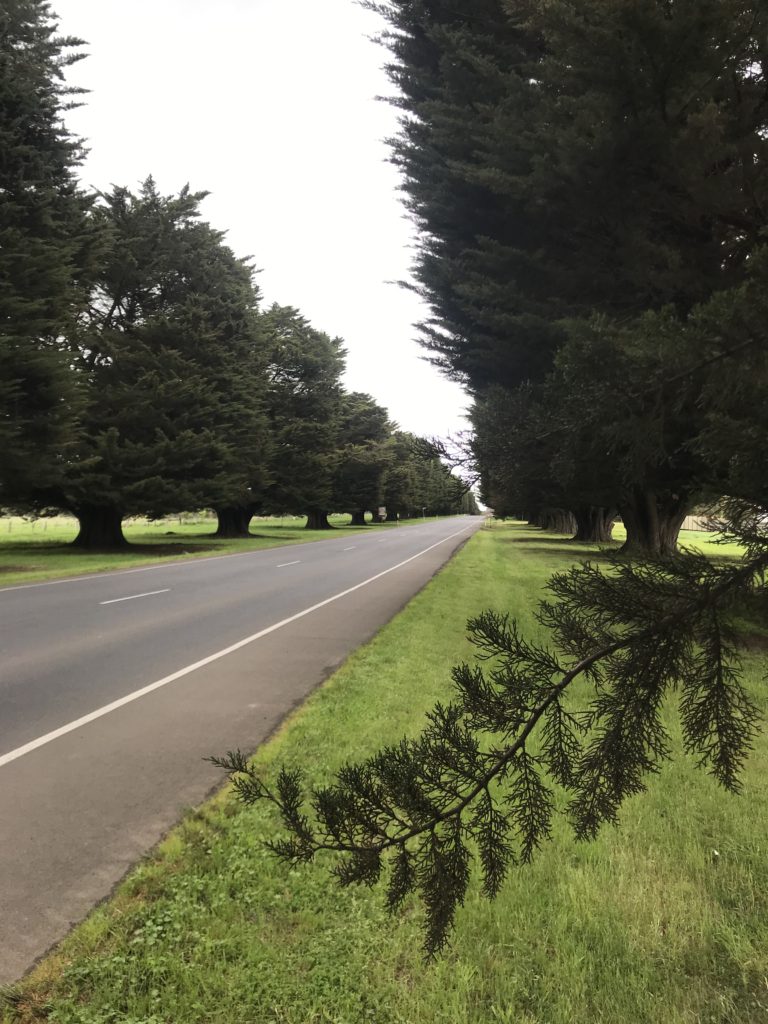 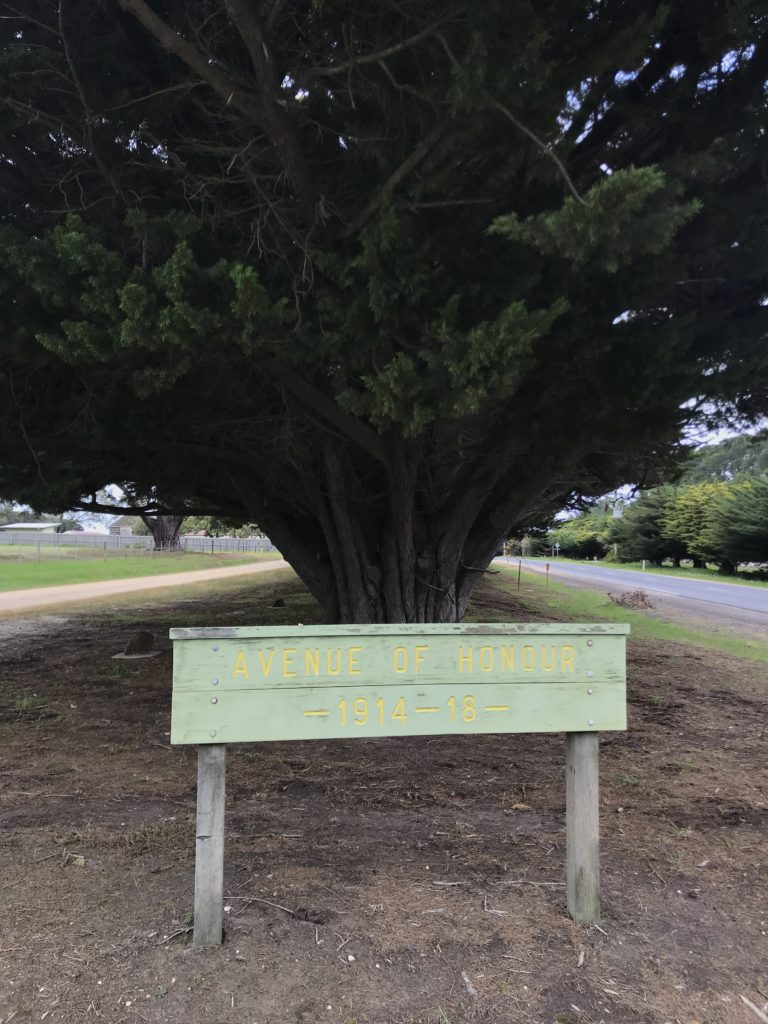 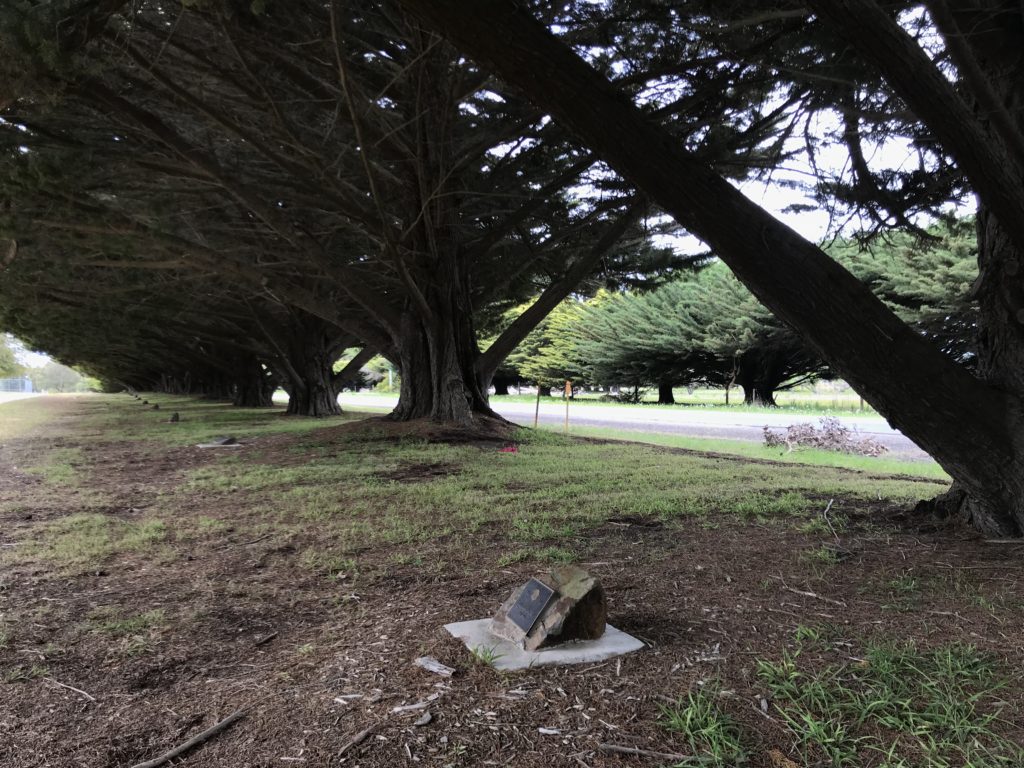 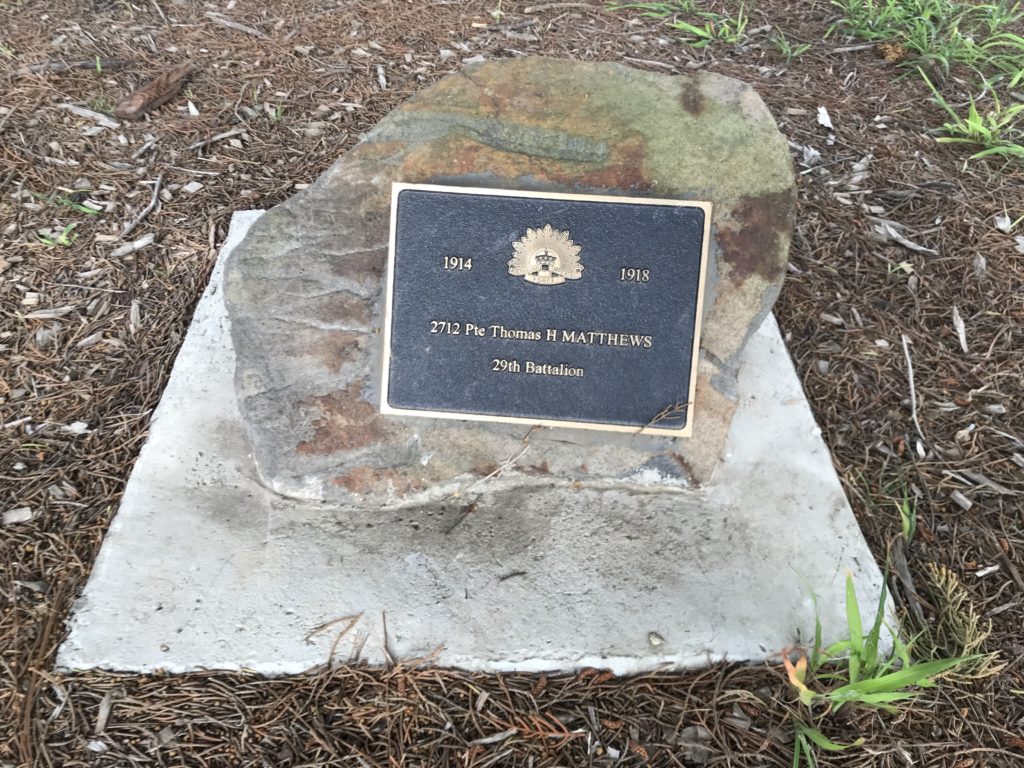 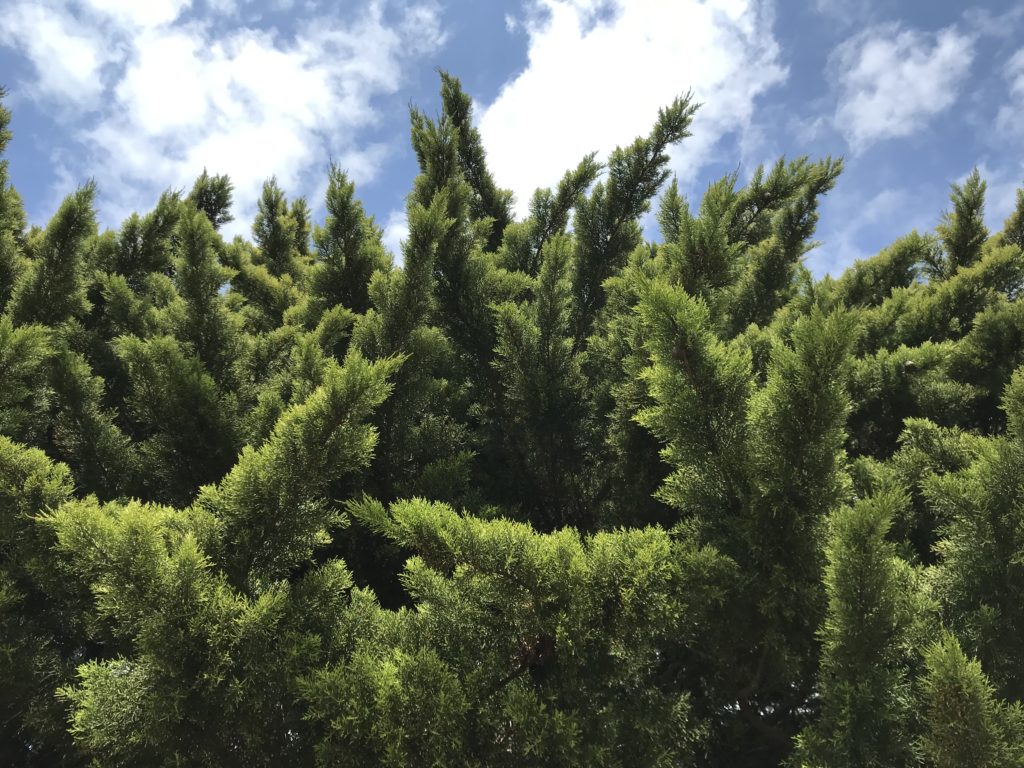 Life is a passage

But a wand’ring ‘cross time

In the kinship of soldiers

As I walk down the line

Cent’ry grown, in your stead

Standing, lest we forget

Of the sacrifice bled

On and on, through the years now

Rooted tributes to you 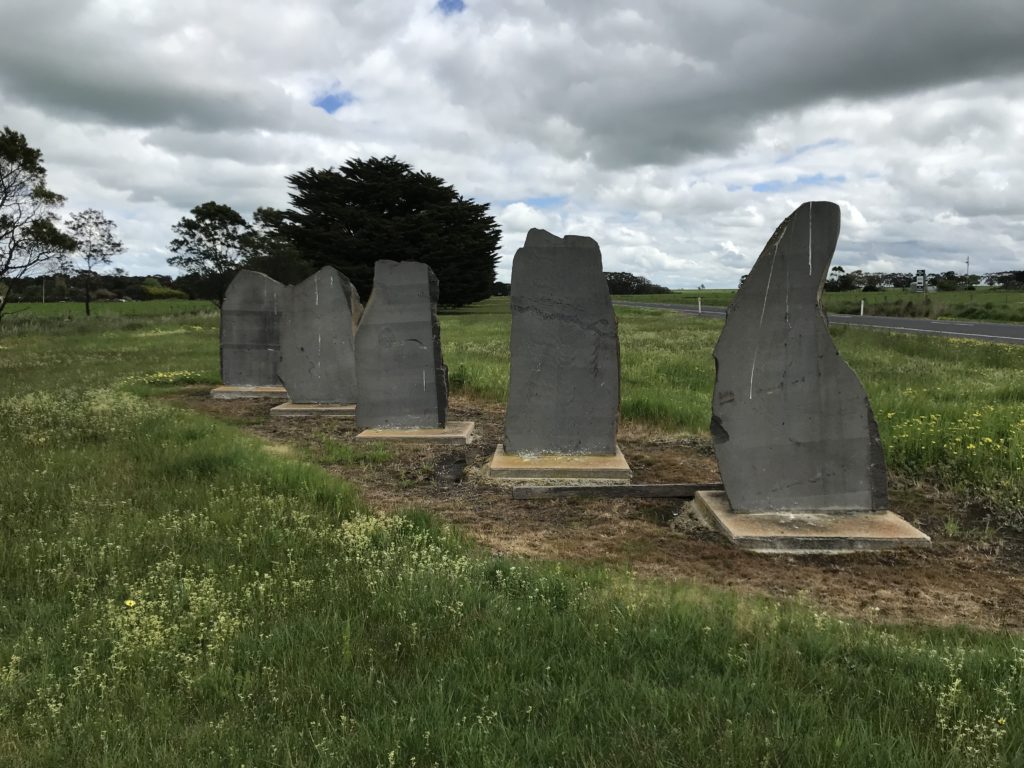 Here I sit, between two ancient cypresses, the living tributes to the sacrifice of “J. Hindhaugh” and “A. Swadling,” and on I write. There is much to reflect upon in my sojourn through the Victorian countryside of Australia, where Old Hespero has taken up a presence in memoriam that is altogether a unique condition for the cultural adoption and landscape design utilization of the species.

Even in comparison to the plantings I bore witness to across New Zealand, with the gargantuan, singular specimens and the ponderous diversity of linear hedgerows, here in Victoria the tree’s presence is something different. Something beautiful. Something of honour. 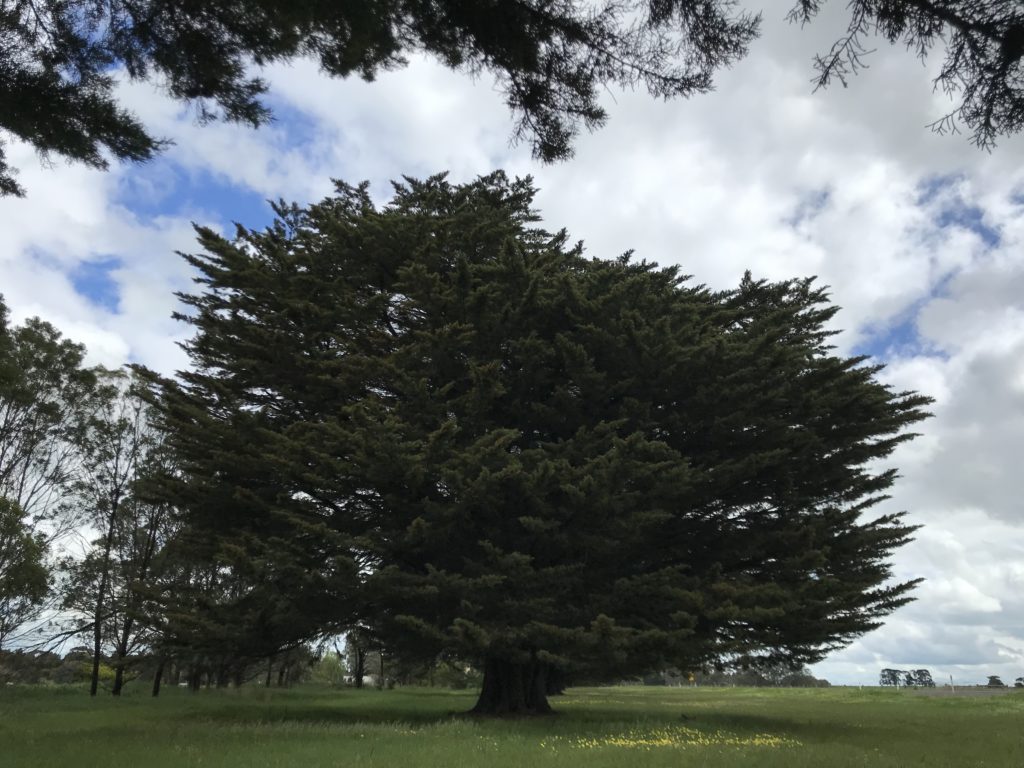 Each Avenue of old cypresses I have seen is a variation on a theme – trees planted, with valiant space between each resolute trunk, in a long line. Some, as here in Hexham and nearby Mortlake, are two such snaking meta-organisms, on either side of a long stretch of road. Others, as in Modewarre and Ellerslie, are just one simple row, with each individual memorial tree given some – varying – amount of room to spread its branches over the years.

This diversity of Avenues deserves a series of drawings, a geometric observational study, to be fully analyzed and appreciated as a use of space, where nothing but the ground plane and trees themselves define the gestalt of the landscape. But my instinct tells me that the most Honourable linear planting of cypress memorial trees that I have witnessed in my wanderings across Victoria over the past several days is that of the Ellerslie Avenue. 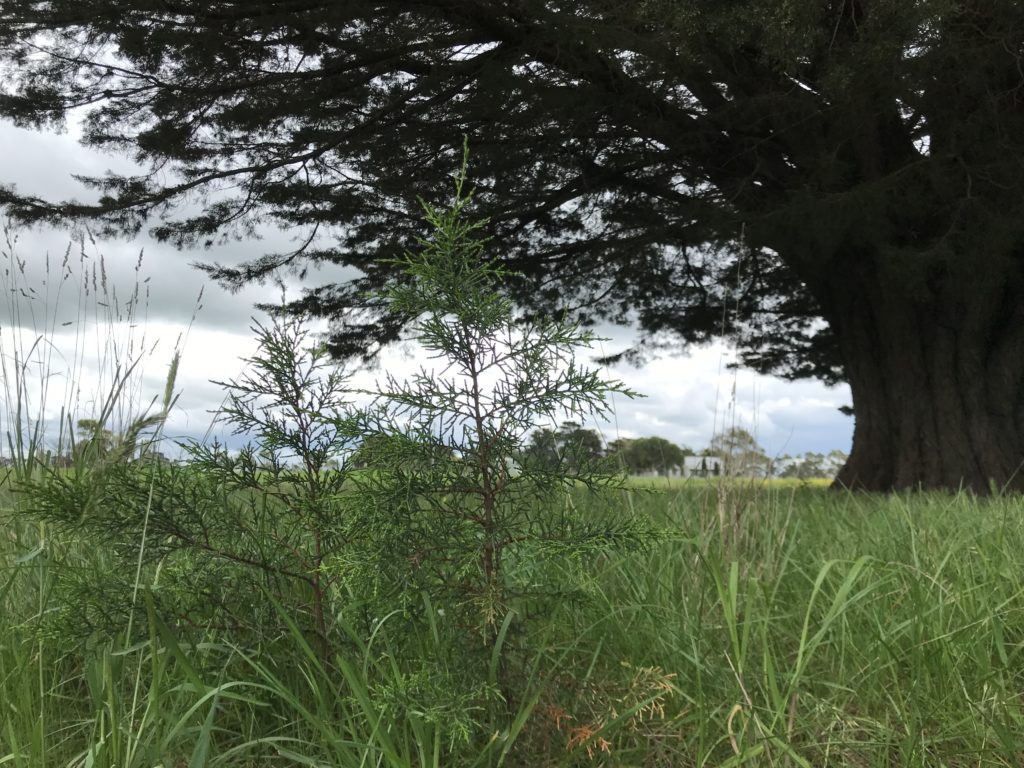 More than anything, the feeling of Honour that coursed through me as I walked down the line of cypresses in Ellerslie was borne from the space each tree has been given to grow over the preceding century. The canopies of two adjacent individuals still do not touch, even after many decades of lateral branching and stretching towards the trees’ nearest neighbors. This room to grow, now that the individual specimens are truly a wonder to behold, each in of itself, somehow preserves the sacred nature, the Honour, of the memorial.  This is a place of wonderment. 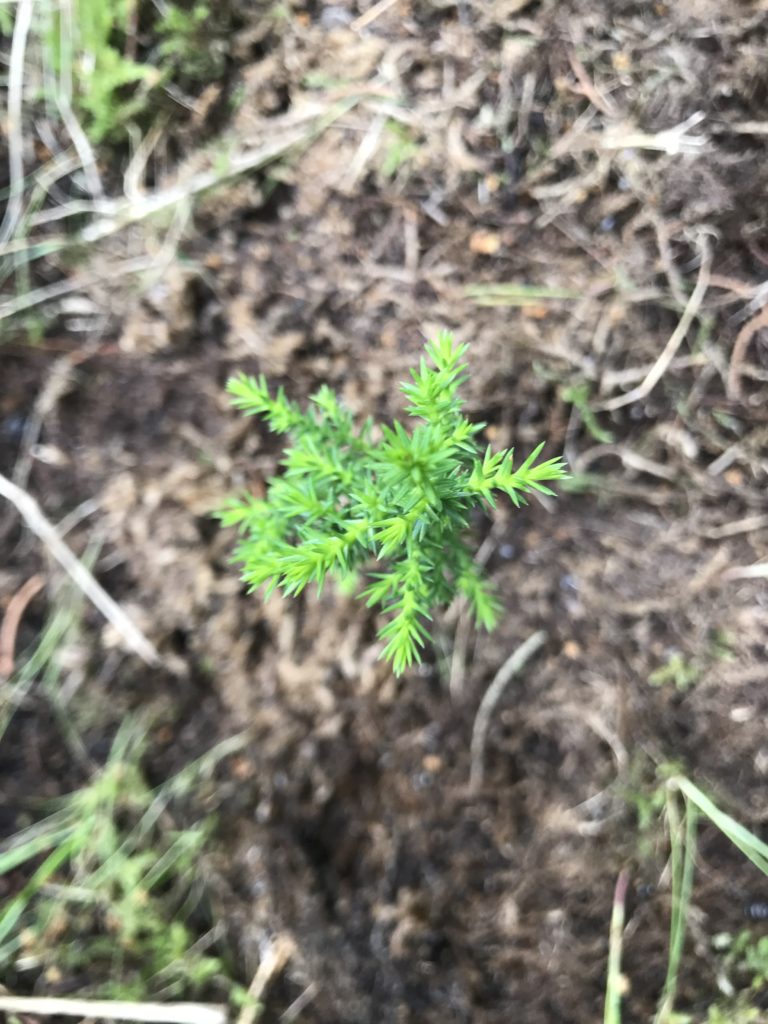 My vision changes, year by year

Each time I visit thee

Of your growing majesty

I know you, closer, now than then

Across the frothy, windswept shore

Composed at Point Lobos, in the company of the Veteran Cypress

[1] From “Dancing on the Brink of the World: Selected Poems of Point Lobos”…