As our namesake tree at the Cypress Lawn Arboretum, the Monterey cypress is a unique species that we treasure as a distinguished feature throughout our growing collection. With nearly 200 specimens living in our Memorial Park, some as old as Cypress Lawn itself and others just planted on our grounds this year, this venerable California native tree is foundational to who we are and intrinsic to the landscape itself.

Truly, Hesperocyparis macrocarpa is a species that is significant not only to us at the Arboretum but all across the planet. The distinguished botanist and UC Berkeley professor, Dr. Willis Jepson, once described this cypress as a tree of “singular beauty … no other tree on earth has so narrow a natural range, though … it has today a wider horticultural distribution than any other California tree species … interesting and pregnant questions multiply constantly about it. All thought, all contemplation, all study are here in a sufficient way eminently worth the mind’s attention. It is one tree whose full history will be highly fruitful, and it will in time easily take its place by the side of those trees most well-known of the earth’s silva[1].”

It is in this spirit of wonder and botanical awe that we at Cypress Lawn honor Hesperocyparis macrocarpa as our inaugural Tree of the Month.

The Monterey cypress is a remarkable relic of California’s geologic past. Though its native range is theorized to once have stretched across the majority of the state’s Pacific coastline, it is now reduced to just a couple of ancient groves spanning 2 square miles on the Monterey Peninsula at Point Lobos State Natural Reserve and Pebble Beach. In 1846, the German botanist Karl Theodor Hartweg first described the species, which he discovered near Point Lobos while collecting potential nursery specimens on behalf of London’s Royal Horticultural Society[2]. From the botanical testing grounds of London’s Kew Gardens where Hartweg’s cypress seeds first germinated, the Monterey cypress quickly established itself as a signature species in the botanical vocabulary of the English estate garden. 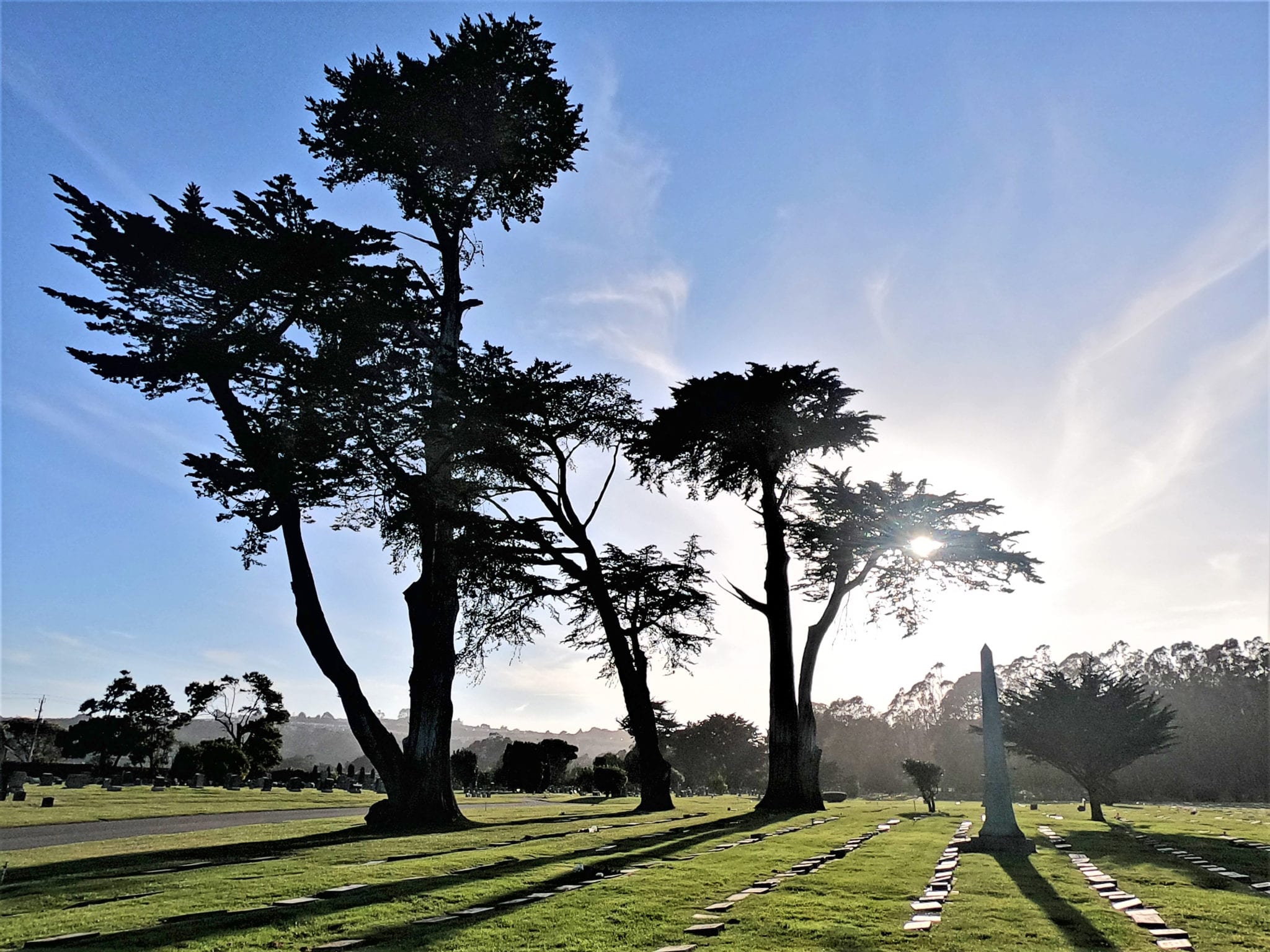 Through the global nursery trade of the British empire, Hesperocyparis macrocarpa then spread to other far-flung territories of the Commonwealth of Nations. Notably, in the Southern Hemisphere, this cypress has become an indelible presence in the rugged coastal landscapes of New Zealand, where the tree is commonly planted as a windbreak on rural farmsteads. The climate conditions of New Zealand, with rich soils and greater rainfall than in California, has allowed the cypresses there to grow incredibly fast, and as such, the largest specimens on earth of “macrocarpa” (as it is commonly known in New Zealand) are found in the land of the Kiwis.

In Australia, too, the venerable cypress has come to occupy a significant place in the cultural gestalt. Through the memorial tree program known as Avenues of Honour, Australia pays living tribute to fallen soldiers from World Wars I and II with long allées of trees, one life planted for each life lost. Many Avenues of Honour in the state of Victoria are planted exclusively with our friend the Monterey cypress, and as these memorial trees reach the centurial milestone, their grandeur is an awe-inspiring and fitting tribute to the sacrifice of Australia’s youth.

In Commonwealth nations and beyond to the farthest corners of the globe, from Greece to Kenya, from Spain to British Columbia, this tree with once the smallest of homes has come to be planted on every continent around the world short of polar Antarctica. Its story still needs to be told, and this tribute vignette is really just the beginning.

When you have the chance, take a day to go visit the ancient stands of the Monterey Peninsula, and see for yourself, in the words of poet Clinton Scollard, “The face of Wonder intimately shown[3].” And, while you are at it, please stop by and see our many specimens of “Old Hespero” – as I fondly call my friend – here at Cypress Lawn Memorial Park and Arboretum.