April 18 was the 116th anniversary of the Great San Francisco Earthquake. In this blog, we are paying tribute to the late Gladys 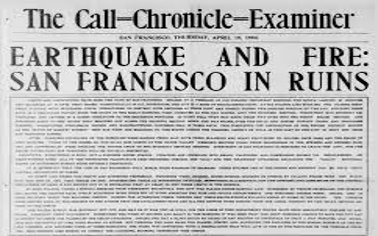 Hansen and her contribution to scholarship. Hansen was appointed as the first (and only) chief archivist of the City of SanFrancisco. Through her tireless and courageous work documenting the “uncounted dead,” the San Francisco Board of Supervisors later revised the “official” number of deceased announced in 1906 from 478 to “over 3,000.” This happened in 2006 – the centennial of the calamity. A memorial to those lost in the earthquake was dedicated by Hansen at Cypress Lawn back in 2006. It sits next to a personal memorial to Hansen created on the occasion of her passing in 2017.

“An enumeration of the dead will never be made. All vestiges of them were destroyed by the flames. The number of victims of the earthquake will never be known.” — Jack London, The Fire, 1906 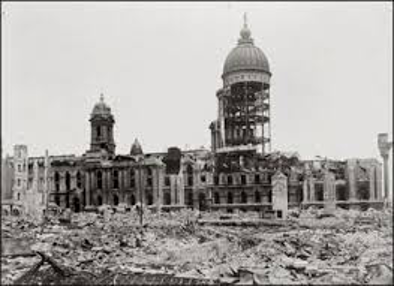 The destruction of City Hall

The San Francisco earthquake of 1906 was regarded as the greatest American natural disaster until Hurricane Katrina in 2005. The shock waves are estimated to have been as high as a magnitude 8.3 on the modern Richter scale. Of the 400,000 residents of the city, over half were homeless. The ferocious shaking knocked out most gas and water lines, which created a perfect three-day storm of fires with hardly any water to extinguish them.

After the earthquake, there was an urgent need for the city to reassure potential developers and settlers that San Francisco was still a thriving urban area dedicated and able to sustain dynamic growth. The Great Earthquake was followed by the Great Cover-Up. Even before the fires were out, a plan was put into place to reduce negative publicity by controlling how and what information was disseminated. Reporters were asked to describe the disaster as a fire and not as an earthquake. 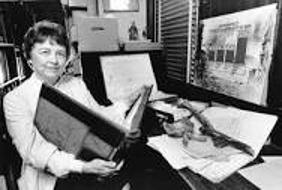 Financial institutions would invest in a city that suffered a fire (such as Chicago in 1871, which quickly rebuilt) because all urban clusters are subject to fires, but an earthquake was a different matter – a capricious act of God that could no more be predicted than comprehended. What if San Francisco was suddenly earthquake-prone? As a confidence-boosting project, the city hired writers to craft positive stories, sometimes ignoring claims of human death and downplaying the connection between the earthquake and the fires. 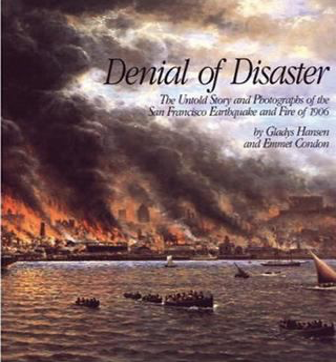 Although Mayor Eugene Schmitz created a committee on history and statistics to compile a scrupulous earthquake history, no official report was ever produced from the voluminous material collected, and now virtually all that material has vanished. How did this happen? No one knows for certain. One theory is that much of the material was lost or displaced in the great Berkeley fire of 1923. There were rumors that the Southern Pacific Railroad sought to cover up the impact of the crisis because of its vast landholdings and hauling business in San Francisco. Its monthly magazine, Sunset, ran optimistic and misleading stories about the fires with hardly a mention of the earthquake itself. Might the company have helped to suppress committee evidence? Insurance companies were known to buy the rights to any photographs of the disaster it could find. Some speculated that perhaps they were also involved. 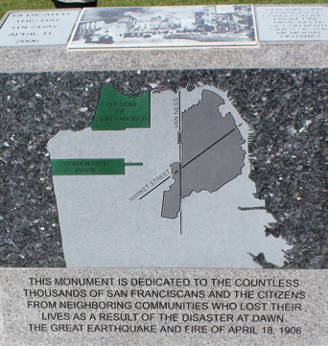 Whatever the truth, the disappearance of the materials fed the conspiracy theory that the report was deep-sixed by influential people. There was, at the very least, a conspiracy of obfuscation and accommodation.

Shortly after the calamity, the Board of Supervisors quickly fixed the count of dead at 478, and although there was some initial skepticism at the low figure, it was eventually assumed to be correct. Even when the remains of additional bodies were discovered as the ruins were cleared and known residents had disappeared and were never found, that official assessment remained unchallenged until 1964 when Hansen, the new research librarian at the San Francisco Public Library’s Special Collections, began compiling a catalog of the dead, since the 478 statistic never came with a list of specific victims. 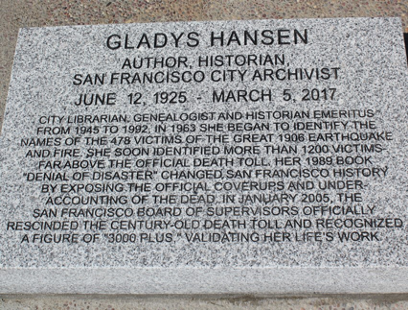 Through Hansen’s exhaustive investigations, including the solicitation of inquiries from the public, we have come to substantially change our view of the earthquake and its human devastation. Hansen went through all the newspapers from April 18, 1906, to May 18 of the following year. She enlisted the help of Frank Quinn, the retired city registrar of voters, who examined the department of vital records, the health department, and the coroner’s office. Additionally, she scoured city directories, old maps, and church records. One journalist described her efforts as “doing detective work for the bureau of missing persons.”

Throughout this arduous process, Hansen was aided by her son, Richard, who has become a leading authority and author about the calamity. As a direct result of the Hansens’ research, the San Francisco Board of Supervisors took the occasion of the 100th anniversary of the earthquake to officially set the number of dead at 3,000. The Hansens believe that future research will reveal more victims, perhaps doubling the current figures.

In 2006, Cypress Lawn dedicated a memorial to the earthquake victims who were acknowledged through Hansen’s work. She was cremated at Cypress Lawn in 2017, and her ashes were scattered. A tribute built in her honor sits next to the Earthquake Memorial at Cypress Lawn.