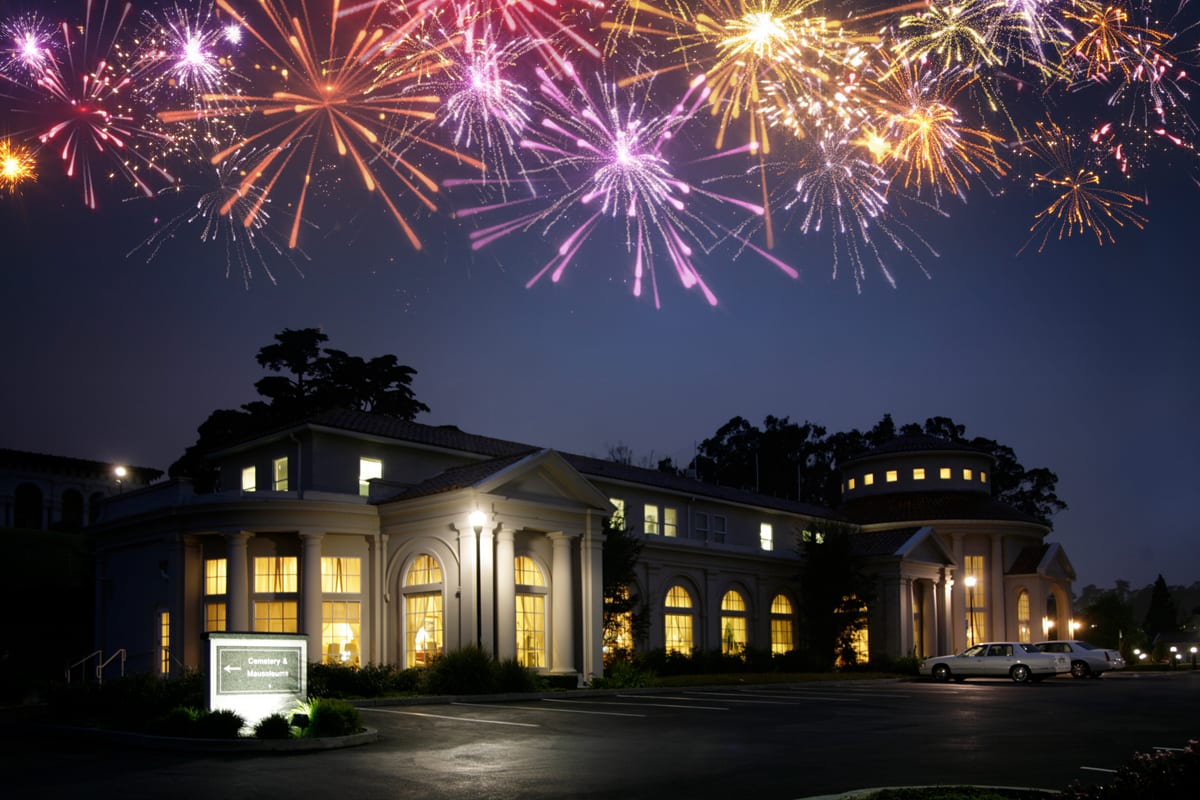 One of our favorite holidays here at Cypress Lawn Memorial Park and Funeral Home is the 4th of July, as families don their red, white, and blue, and gather throughout the Bay Area to celebrate our country’s freedom. American history, with its ever-evolving victories and hardships, has shaped us, as individuals, as well as the great state of California, home to some 39 million people.

Our team at Cypress Lawn has an interesting perspective on American history, because in many ways we helped write it! The inspiration for Cypress Lawn came during a carriage ride past San Francisco’s Laurel Hills Cemetery, which had gone from civic pride to civic eyesore. San Francisco’s land-hungry residents quickly turned inhospitable to cemeteries. In 1892, a group of civic-minded men led by Hamden Noble established Cypress Lawn Memorial Park a dozen miles south of San Francisco as a solution to the problem. Cypress Lawn became, and still is, the cemetery for the most influential families in San Francisco and California. Magnificent monuments and edifices to memorialize the achievement of those who helped shape the Golden State were built by the leading architects, sculptors, and stained-glass artists of the early 20th century. In fact, it’s been said that Cypress Lawn’s outdoor and indoor collection has more elegant works of art than many museums.

Cypress Lawn, perhaps as no other single place, represents the political, economic, and cultural history of the American West.

That’s why – in celebration of our nation’s birthday – we thought it would be interesting to highlight a few of our favorite moments in California’s remarkable history: To remind us of where we’ve been, and how the past impacts the present and future.

“I picked up one or two pieces and examined them attentively; and having some general knowledge of minerals, I could not call to mind more than two which in any way resembled this, iron, very bright and brittle; and gold, bright, yet malleable . . . I then collected four or five pieces and went up to Mr. Scott with the pieces in my hand and said, ‘I have found it.’

“What is it?” inquired Scott.

The Gold Rush began in 1849 and went on to be one of the most significant events in forming our state and our nation, as California’s population soared from 14,000 to 250,000 in only four years.

As you and your family prepare for parades, festivals, and fireworks this July 4th, consider planning a summer trip to visit us at Cypress Lawn. Our architecture and breathtaking grounds are truly one of a kind, and are often referred to as “heaven on earth.” Now is the perfect time to see what makes our corner of this stunning state so magnificent!